Blog
Home > Blog > Blog > An app that can stop you from drunk spending?

An app that can stop you from drunk spending?

Have you ever been on a night out on the town, only to wake up and find that your bank balance is severely lacking? Surely those three cocktails that you had couldn’t have amounted to such a large sum of money. Then it begins to come back to you, you saw your friend from University at the bar and agreed to buy more drinks and of course, you finished the night in a kebab shop!

Drunk spending is a common thing and is nothing to ashamed of as it can happen to the best of us, but is something that you most definitely want to avoid. Drinking too much alcohol can make you vulnerable to overspending, but what if there were a solution? One (less fun) solution would be to not drink so much, and another would be a newly developed app which actively stops you from overspending when under the influence of alcohol.

Yes, the app actually exists! The apps name is DRNKPAY. The aim of the app is to not only help you spend your money responsibly when under the influence, but also drink responsibly.

DRNKPAY certainly sounds ideal, but how does it work? First you download the app onto your Iphone or Android and link your bank cards to the app. You can select the number of drinks you wish to have throughout the night in advance (e.g three pints of beer) – you can change this if you want to.

Next, you select where you wish to block the payments for after you have paid for this amount of alcohol. This could be simply just bars, clubs and pubs or you could extend it to food, flights, online shopping or simply select all categories if you have been known to do some seriously reckless and ridiculous spending after having a few too many. All the cards you have chosen to link to the app will then be blocked for 12 hours.

To measure how much alcohol you have in your system, a breathalyser can be connected to the system via bluetooth. This is called the BACTrack breathalyser. This can be used to measure your alcohol levels prior to each payment in order to authorise payment at a bar, club or pub. If the system determines that you are under the pre-defined limit, all the linked cards will be activated and payments will be able to be made. If you are over the limit, your cards will be or remain blocked and no further payments can be made in your allocated categories. 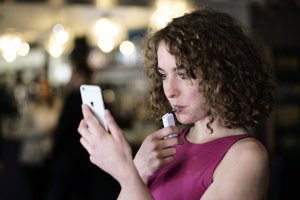 The app also connects to the QuantacTally biosensor wearable so it can know hoe much you have drunk and consequently limits certain transactions if you have had too much. The Quantac Tally is a wearable bracelet which can cleverly analyse the alcohol content within your bloodstream. 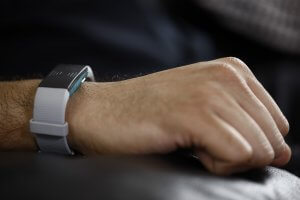 What if I need to get home by using my card?

Something that may worry you about this app is, if all my cards are blocked and I need to get home, how can I order a taxi or an Uber? Well this has been thought through by the developers. Even if all your cards are blocked, DRNKPAY has a convenient ‘help me out feature’ which allows you to order yourself an Uber so that you can still get home safely. 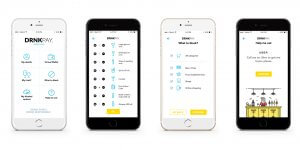 The need for the app – Morning After Regret

The developers of the DRNKPAY app, with a pan-European blue chip client base, noticed that there was a need for this new app/system. They saw the gap in the market after OnePoll conducted research which revealed that half of the population of UK drinkers aged between 18 and 34 had admitted they have regretted purchases they had made whilst under the influence of alcohol.

Some more unique examples of ‘morning after regret’ included purchases such as flying lessons, a life-time membership to a rowing club for someone who had no interest in rowing, £250 vintage Star Wars toys, a caravan, 30 pairs of flip flops and our personal favourite, a live chicken.

The CEO of iBE TSE, Francesco Scarnera explained that “This is a problem many of us have encountered, so we decided to create a simple solution which uses the latest technology. Once you’ve hit your self-imposed limit, the app will lock your card and prevent you making further payments. It’s up to you whether to block all payments, or just certain ‘weak points’, such as takeaways, clubs, or that flight that seems like such a great idea at 4am.” (Source drnkpay.com)

The developers aim for the app to be publicly available within 12 months. IBE TSE are currently partaking in discussions with a range of banks and card providers to do with rolling the technology out to their customers within the 12 month goal.

It is the plan for the system to be offered for free by providers who are looking to help their loyal customers control their spending habits.