The new £1 was released into the British public earlier this month but suddenly, news has emerged that around 200,000 trial coins were issued by the Royal Mint and are fetching up to £250 on eBay by coin collectors worldwide. (Source: The Independent)

The valuable coins will say 2016 on them (instead of 2017) and apparently this was done on purpose as The Royal Mint will always put some practice ones into circulation.

“The aim was to provide these manufacturers with additional levels of confidence of the compatibility of their equipment ahead of the introduction of the new £1 coin, which is standard practice when a new coin is being introduced,” the Royal Mint said.

The Royal Mint has made it clear that these coins do not have any legal tender status or value so they cannot be used in stores. Although, who is really going to know the difference?

But regardless of whether or not they can be used, that has not stopped crazy coin collectors worldwide trying to get their hands on one of these limited edition beauties. In fact, one source claimed to be selling the coin for as much as £10, 000 through the online bidding site.

In terms of the new ones, there are £2 billion new £1 coins out there so finding one at random has worse odds than winning the lottery or being struck by lightning. 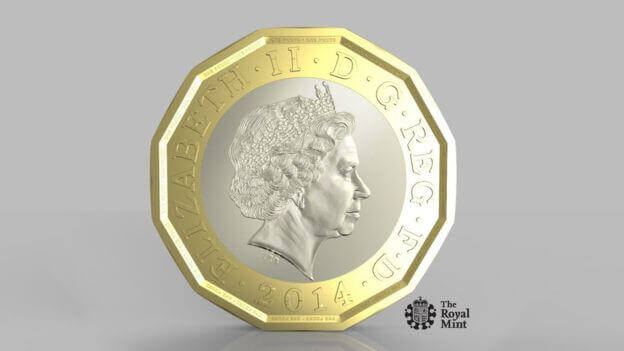 What is Different With The New £1 Coin?

As with the current £2 coins, the 2017 £1 coin is bi-metallic . It has an outer case of ‘gold’ coloured nickel-brass band with an inner ‘silver’ coloured cupro-nickel disc.

One will notice the floral crown on the reverse side for any rotations, as well as the Queen’s head, which sits directly above the new bevelled edge.

The Royal Mint announced that the new £1 coin is the ‘most secure in the world’ and nothing is more sophisticated in the world. This begs the question as to whether it should really be worth more than just £1?

Its new features make it more difficult to counterfeit including:

See it in action here:

When Will We Stop Using the Old £1 Coin?

Regarding the old £1 coin, this will cease to be used in the British public from October 2017. There are 24 versions of this coin and collectors will be sure to get one of each for their precious collections.