What is a Pingtree?

A Pingtree is a type of lead generation technique where a customer’s live application is sent to numerous lenders in real-time and eventually the application is sent to the highest bidder. It is less common the guarantor industry but historically has been very popular for the payday loans sector, although its popularity is started to diminish following the introduction of strict regulations imposed by the Financial Conduct Authority.

Below is an American video explaining how a Pingtree works. Although it applies to the US market and is focused on the lender, it provides one of the best explanations around:

How a Pingtree works

The Pingtree itself is a type of software and it is connected through an API to either a lender or affiliate’s website. It is purely an online transaction and owned by a software company. It starts with a customer applying for a loan on a website and filling in a few basic details e.g name, address, residential status, employment details and bank information.

There are up to 30 lenders on the system and each will have their own criteria and ping the application to see if they want it. If it does not meet their criteria, it simply gets pinged to the next highest bidder and so forth.

Once complete, their application is sent in real-time to a number of lenders who have partnered up with the Pingtree. There are up to 30 lenders on the system and each will have their own criteria and ping the application to see if they want it. If it does not meet their criteria, it simply gets pinged to the next highest bidder and so forth. The highest bid always has first dibs on the application and they can pay as much as £70  for the lead and if it gets rejected by each lender, it will eventually go for something as little as 5p to a company that maybe offers debt management, credit cards for bad credit or simply to a call centre. Once the company accepts the lender, the applicant is automatically sent to a new window stating that the application has been accepted or requires a few extra checks, so they may need to sign a loan agreement or submit a phone call to complete the transaction. 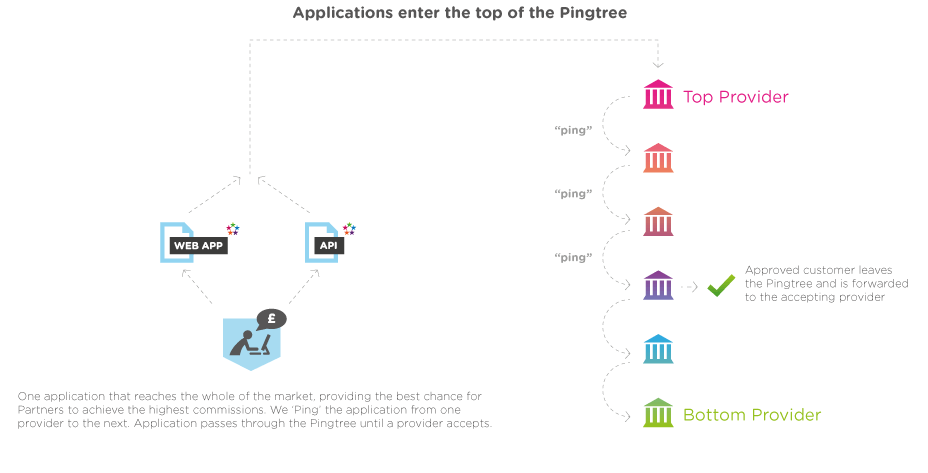 The reasons that the application might be rejected and pinged off to the next one could be for various reasons. Perhaps they don’t meet the initial criteria of being employed, on benefits or maybe the lender has seen them before and already rejected them, so just passes them on.

Here is a Pingtree example below from The Guardian: 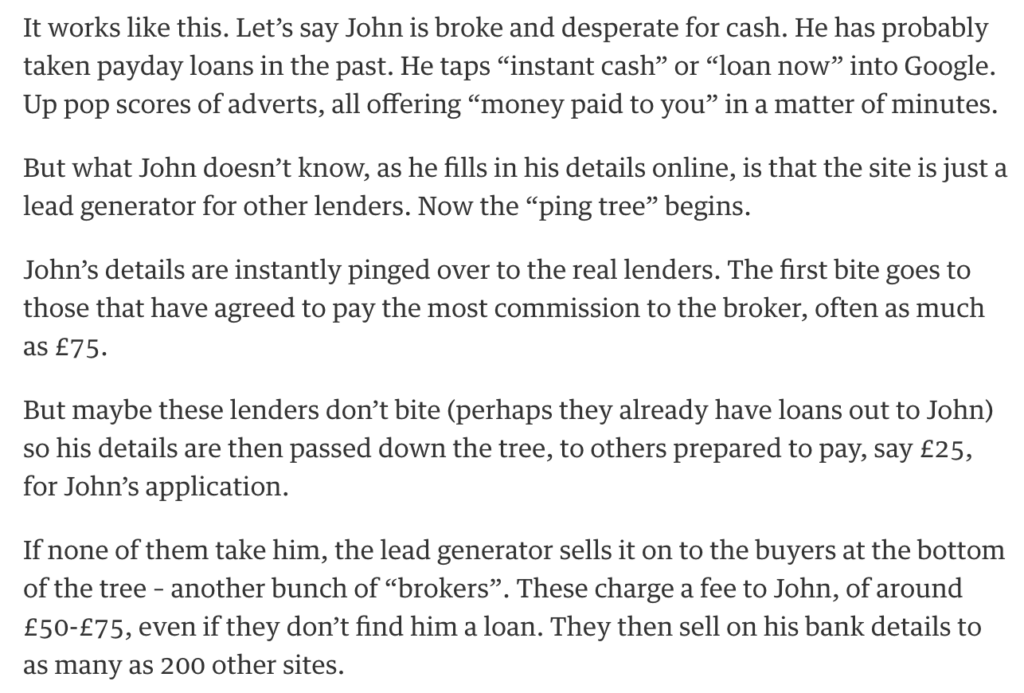 Payday lenders have historically used Pingtrees as a fundamental part of their lead generation strategy, in addition to SEO, PPC and TV advertising. For the lender, they get to pick their criteria so they know they can get a customer that they will hopefully fund and they can set the budget accordingly, so they know however much they pay will be profitable and meet their margins.

On the reverse side, any leads that the lender received through other mediums or maybe repeat business but there did not want to fund, they could sell off through the Pingtree and still make money from it. Hence, it was possible to monetise every application.

During the payday loan boom around 2012, Pingtree made up around 50% of all leads generated for mainstream lenders, however this has decreased significantly over the last few years due to increased regulation by the FCA. The biggest change in regulation requires all payday lenders and brokers to have full authorisation from the FCA which is a lengthy process to prove that they viable and responsible to provide this service. Previously, anyone could create an affiliate site or broker site and plug in the Pingtree and sell leads with no regulation required – and there were literally tens of thousands of sites doing this.

A big issue was that the process lacked transparency as borrowers would go to a broker site and be  unsure who they were actually applying with. It was also common for their contact details to be shared by numerous companies and this led to consumers being bombarded with phone calls, emails and text messages. Stricter regulation has improved this process significantly with several brokers forced to exit the market and margins being cut drastically.

As mentioned above, affiliate websites including broker sites, portals and comparison sites are able to add the Pingtree software to their website. All the affiliate needs to do is bring traffic to the site and provided applicants are filling in the form, they will be able to monetise the traffic that comes in, doing an 80/20 revenue split with the Pingtree software (80% for the affiliate). Source: Econsultancy.com

Naturally, the better the quality of the traffic (not repeat customers, good credit scores, in employment etc), the higher the potential commissions. Again, the market for affiliates offering Pingtrees has diminished following strict regulation.

Whilst the Pingtree system mentioned above is the most common, other forms have emerged. Notably, some software companies have introduced a system that purely focuses on how ‘new’ the lead is. If it is the first time the customer has hit the system, they will be worth the maximum amount and can be bought for £75. The more times the individual goes through the system, the less they are worth incrementally e.g £50, £25 and eventually 5p. This method implies that older customers have likely done the rounds and been declined elsewhere if they repeatedly go through the system, hence their value is worth less.

Is it good for the customer?

On the one hand you could argue that this technology is good for the customer because it allows them to be matched up with a lender that willingly wants to fund them. But on the other hand, there are a lot of negatives for the applicant. Notably, their contact information being sent to numerous lenders is somewhat invasive and receiving unwanted text messages and phone calls is never welcomed.

In addition, by having your application checked by numerous lenders means that the individual might have several searches on their credit file at once. This can be an issue as they will likely stay on the person’s file for at 12 months  and you can read more about credit search footprints here. Most lenders consider a lot of search footprints as a bad thing because it makes it seem that the borrower is desperate for funds and trying lots of options. In some cases, it can reduce your credit score, which is terrible considering you are trying to improve your chances of being funded.

Thousands of customers have caught onto this hence the demand for search term ‘direct lenders’ has emerged on Google as individuals look to work directly with the company. In conclusion, the opportunity to use a Pingtree is useful for an affiliate looking to monetise their traffic, albeit the earnings are less than they were 3 or 4 years ago. For the borrower, they are probably better off borrowing from family and friends or by going through a direct lender.