FCA states it is pleased with the payday price cap

The Financial Conduct Authority (FCA) announced this week that they are pleased with the result of its price cap that was introduced for the payday loans industry in Jan 2015. The regulator, who is responsible for overseeing the consumer credit industry, including guarantor loans,  took over from the Office of Fair Trading in 2014 and aimed to clean up a high-cost and heavily criticised payday loan sector.

Why Introduce a Price Cap?

A price cap was established in the industry to avoid lenders charging high amounts. The APR for payday loans is always going to be inflated because it is taking something that only lasts a few weeks and multiplying as though it were a year to make it an APR, and easily comparable against other financial products.

Several lenders were charging rates that were considered usurious, with payday giant Wonga leading the way with a whopping 6,000% APR, around 1% per day. As part of a clean up of the industry, the FCA introduce the price cap and other rulings such as requiring every lender or broker to go through a strict process of being authorised, include a link to a price-comparison-website (PCW) clearly on their homepage and also move from providing a 28-day payday product to a minimum of 3 months.

The main goal has been to drive out the less responsible companies in the sector and  significantly improve the products, costs and transparency for customers.

Findings of The Report

A review of the price cap shows that lenders are charging a maximum of 0.8% per day, equating to £24 per £100 borrowed and no customer has repaid double the amount that they have initially borrowed. The result of the price cap has been:

The price cap was driven to help consumers pay less. The BBC reported that 760,000 borrowers in this market were saving a total of £150m a year.

With lenders working on small margins, they have had to get stricter with whom they can lend to. Whilst this might seem like a negative, there has always been an issue with vulnerable applicants receiving loans that they cannot afford, but this risk now diminishes as lenders have had to become more selective. This result though has been far less complaints to the regulator – which is another real positive in an industry that would sometimes see over 100,000 complaints per year.

With the positive review of the price cap, the regulator states that they will not change it until 2020.

One area of finance that the FCA have raised concerns about is the cost of bank overdrafts. This is specifically focused around unauthorised or ‘unplanned’ overdrafts where customers use credit cards and go over their assigned limit without permission. You are usually allowed an unplanned overdraft of a few hundred pounds but the costs can be exorbitant because essentially you are borrowing without permission or any formal checks being made, putting the bank or lender at risk.

Whereas the cost of a payday loan is a maximum of £24 per £100 borrowed, the cost of an unplanned overdraft can cost between £6 to £90 per £100 borrowed, depending on the bank or credit card provider. The regulator has put banks under pressure and there have been discussions of a price cap or making it a one-off fee to use your overdraft facility.

Attempts to reduce the risk of high fees have been achieved by banks sending a SMS to individuals as soon as they start to go into the red, but the FCA said that this is not enough.

Which states that there are 4 main issues with the way unplanned overdrafts function at the moment: 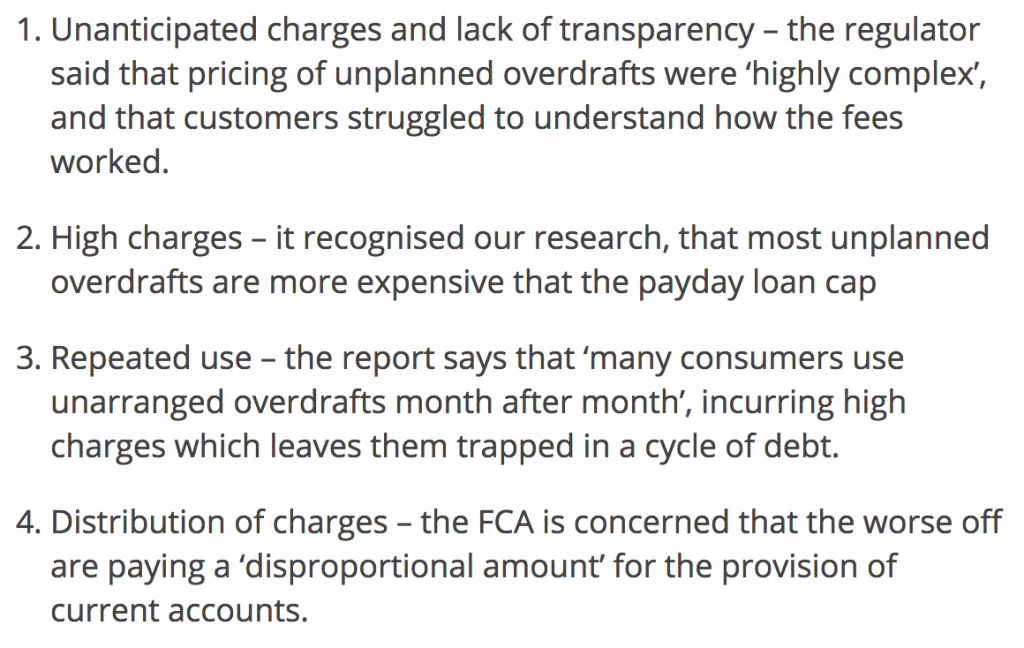 How The Banks Are Trying To Help

Other Areas Being Reviewed By The FCA

It is not just the banks and overdrafts that the Financial Conduct Authority believe need attention. Other high cost forms of borrowing under the microscope include:

Rent to own refers to renting household appliances such as TV’s, microwaves and white goods like dishwashers and fridges. The reality though is that the cost is also extremely high – in fact it can be three times the cost of renting it over a year, than compared to just buying it outright.

An example to buy a 65′ Sony TV from Brighthouse (one of the largest retailers) will cost around £32 per month, equal to £1,700 per year. Tesco Direct, however, offer the same product to buy outright for £1,200 – and this means you keep it, not giving it back at the end of the year. 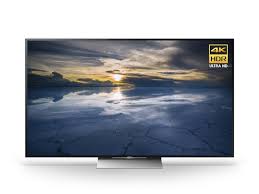 Other areas being investigated include home-collected credit and credit on goods bought from catalogues – again claiming that the fees charged are too expensive and are used by vulnerable people.

Motor finance is another industry that will be reviewed, with the regulator stating that more stringent affordability checks need to be carried out for individuals buying cars and vans on finance.